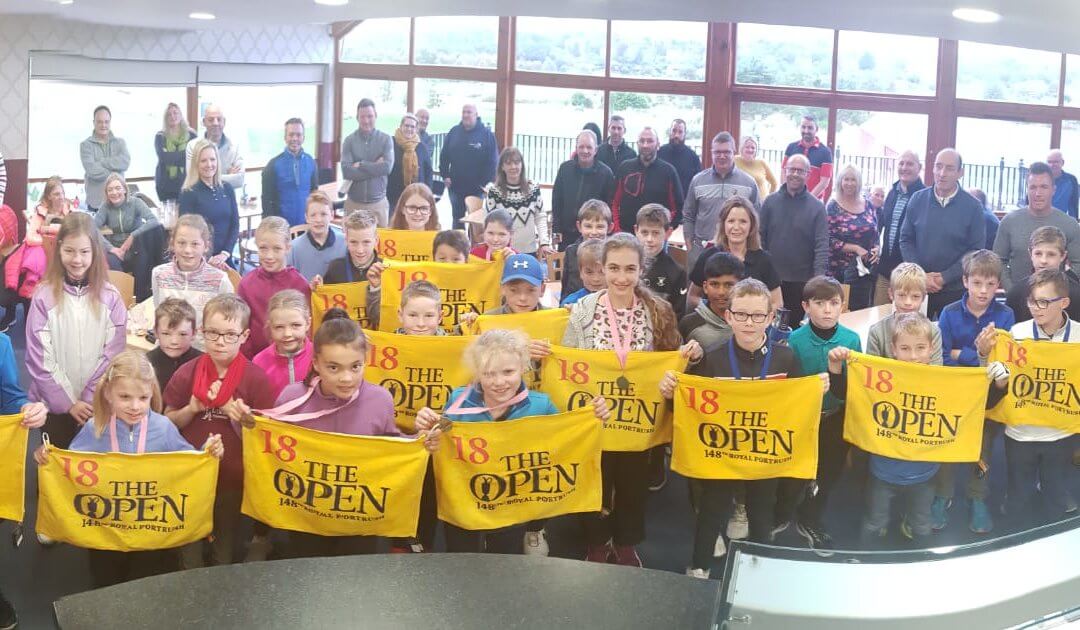 It was a busy day at Paul Lawrie Golf Centre on Saturday (5th October) for our end-of-season Flag Finals.  All of the Under 10s & Under 12s Boys & Girls who had placed at a Flag event during the course of the season qualified to participate in the finale event.

On a tricky day, due to swirling winds and smirry rain, the finalists had to contend with the conditions as well as the additional pressure they placed upon themselves for the final event.

Under 10s Girls – Holly McKenzie and Amy Blackadder tied for first place as they both made it to the 8th hole.  Lois Reid placed 3rd in this section

Under 10s Boys – It was a close-run competition for the boys in the Under 10s.  Aiden Watson finished in third place, edged-out by Reece Nicol (runner-up).  Kameron Brown claimed the top prize by reaching the 8th green.

Under 12s Girls – Sisters Lily & Evie McDonald finished third and second, respectively, in their section but it was a terrific performance from Catherine Bell which saw her 36th shot finish just a foot from the hole at the 9th – her personal best in her last ever PLF Flag (and equalling the best performance from a girl in the U12s age category).

Under 12s Boys – In reaching holeside of the 9th, Rhys Yule won his age-group category, defeating Peter Mair (who also made it to 9 green in 36 shots) and Kyle Marshall in third (achieved the 9th tee).

Advanced Flag – In the newly created Advanced Flag section it was an extremely close affair but Oli Blackadder tiptoed past Zack Don by holing his 36th shot at the 11th hole to make it to the 12th tee.  Zack finished around 10ft from the 11th and Ollie Robertson, by holing out at the 10th finished on the 11th hole and claim 3rd place, just ahead of Conlan Waldron.

As part of the Flag Finals Day we also ran a couple of Nearest the Pin challenges using the Centre’s TopTracer technology.  The 7th hole Par 3 at Pebble Beach was our challenge hole for the day.

In the Under 10s Boys it was Mitchell Sinclair who claimed the prize with his shot to 4’4″.